Where do we begin? 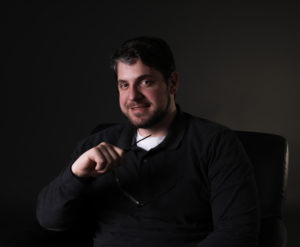 Zany is the first word that comes to mind, but it doesn’t do him justice. Having Ben around is like having an all-day floor show with no cover charge. Or having the comedy channel on. All day. (Although we do sometimes find ourselves shaking our heads and looking in vain for the remote control…)

Ben edits our videos like a boss, and his animation is crazy creative. He’s an expert at Adobe Premiere, Adobe After Effects, Adobe Audition, Adobe Photoshop, and Adobe Illustrator. He teaches himself stuff on the weekends and then comes in and puts it to work on Monday. Ideas tumble out of him like socks from a dryer. We just try to catch them all. Like many of the team members at MediaFuel, Ben is a musical guy. He’s performed at the Cole Porter Room at the Indiana Historical Society, and some shows with Civic Theatre. It’s nearly impossible to utter a phrase that doesn’t prompt a song cue with Ben. He’s a virtual Wikipedia of musical genres, but he favors John Williams, Alan Menken and Stephen Sondheim. (You’d be surprised at how anything you say cues “Johanna” from “Sweeney Todd”…)

Ben is a man of many voices. He can slip between Vincent Price, Kermit the Frog and Optimus Prime several times in the course of a single conversation. He does the voiceovers for many of our videos here. He’s also a man of many talents. He wrote a musical called “Silver”, based on the book “Treasure Island”. He’s also authored a children’s book called “The Sunchaser.” In his spare time, he co-hosts a podcast called “Spark of Madness.”

What will Ben come up with next? Heaven only knows.

And we can’t wait to see.