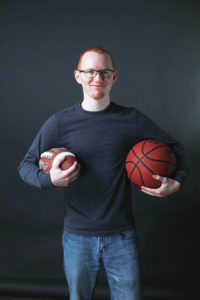 Bailey needs sooooo many names, because he does sooooo many things. Bailey came to MediaFuel as an intern while he was completing his MBA at Anderson University in 2017 and quickly took the place by storm. Now, Bailey leads the digital analytics team and has also taken ownership of several key accounts.

Bailey is simultaneously unimposing and scary smart. Like if a human calculator got rolled up into Wikipedia and came out with fiery red hair and glasses. That’s Bailey. He’s our own, personal DuckDuckGo.

Atypical of most redheads we know, Bailey is completely even-keeled. When he gets frustrated, he’s more likely to channel SpongeBob SquarePants than he is to swear, so we know if we hear “Barnacles!” or “Tartar Sauce” coming from his general area, he’s in problem-solving mode and we leave him alone.

Bailey is an avid sports fan, and since he hails from Ohio, his teams are the Cavaliers, the Bengals and Ohio State. (Go Bucks!)  When he’s not working (which isn’t very often… go home Bailey!) he spends time with his wife, Kira, and his more-than-a-little-crazy yellow lab, Harvey.